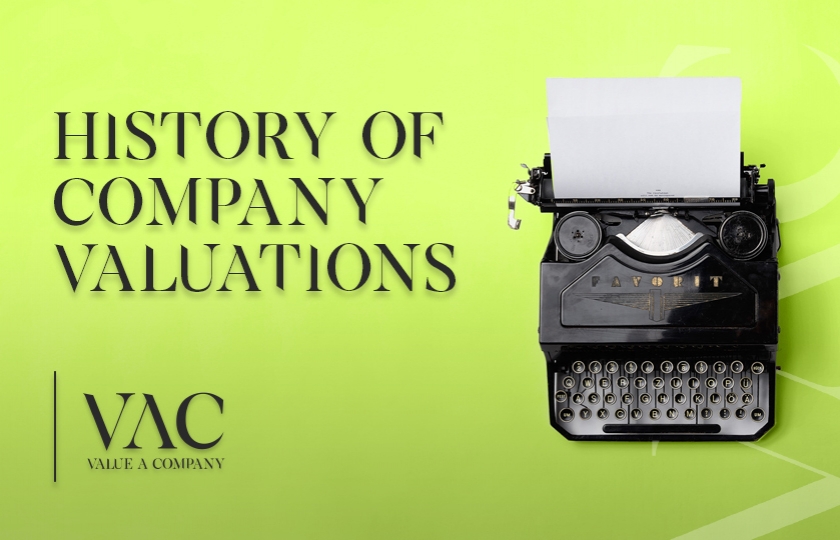 While we are unable to pinpoint the precise moment when the first company valuation took place, we can be fairly certain that it was during the 1800s. The Industrial Revolution was underway and the modern capitalist economy emerged. Both Great Britain and the United States transitioned to new manufacturing processes, and saw dramatic increases in population and per capita incomes. As advancements were being made in areas such as communications, textiles, steam power, iron making, machine tools, and transportation, it became easier for laborers to perform tasks more uniformly, so larger companies started to form and be sold. To facilitate these sales, accountants and actuaries were enlisted to analyze the companies’ financial documents to assess accuracy and the value of their projections.

In 1858, the state of Massachusetts passed a law requiring all companies in the state that required licensing to be evaluated by a commissioner to value the potential reserves of policies to ensure that they were properly covered. This can be considered an example of when official valuations first became part of what we know today as mergers and acquisitions.

The Great Merger Movement was a business phenomenon that occurred in the U.S. between 1895 and 1905. Small businesses with little market share merged with similar businesses to form major companies that dominated their markets. One example of this was the Standard Oil Company. At one point it controlled almost 90 percent of the global oil refinery industry. An estimated 1,800 firms disappeared into consolidations using so-called trusts. In 1900, the value of companies acquired in mergers was 20 percent of GDP. Contrast that with the year 1990, when the value was only three percent of GDP.

Historically, the valuation methodology believed to be first used was known as the Net Level Premium Reserve Method. This assessed the combined experience of the companies based on the 1843 British Mortality Tables, and an average interest rate of four percent.

In 1862, the U.S. Internal Revenue Service was formed, raising the standards for tax accountancy. In the 1920s, Prohibition led to tax breaks and government compensation for big breweries and similar companies. The IRS created ARM 34 to help taxpayers determine the amount of intangible value lost by a business in the alcohol industry. These circumstances created a completely new viewpoint that a company could actually be worth much more than its assets minus its liabilities, or only its equity, ushering in new valuation concepts regarding topics such as future profits and other intangible values.

ARM 34 later evolved into Revenue Rulings 59-60. This outlined methods and valuation formulas and stated that, “no useful purpose is served by taking an average of several factors and basing the valuation on the result.” Then in 1968, this ruling was modified and expanded into Revenue Ruling 68-609, which is often referred to as the “excess earnings method” or the “treasury method.” This ruling introduced that the formula of determining value for goodwill and requires the value of a company to be based on both assets and income only if there is no better basis available.

Over the years, the basic premise behind valuations hasn’t really changed—but the type of data, risk factors and exact circumstances used has had to evolve because life is quite different today than it was hundreds of years ago.

Until the 1990s and the creation of the Internet, company valuations were conducted primarily by accountants and actuaries. In 1990, the National Association of Certified Valuators and Analysts (NACVA) was created to unite and support the users of business valuation and financial litigation services by training and certifying financial professionals in these disciplines. It was designed to make it easier for companies looking to be appraised and enables an individual from within a business to become certified to appraise it.

There are several different sources for getting a company valuation, such as accountants, business brokers, M&A advisors, and online valuation tools. Which route is best for you will depend on your individual needs. An online valuation tool can be beneficial if you need a quick solution so that you can make business decisions faster, and it can also give you a preliminary idea of what to expect when you work with a third-party appraiser. Specialization of company valuations and methodologies will continue to evolve as the circumstances of our world global markets continue to evolve.

The accurate valuation of any business remains vital to its growth and economic opportunities such as mergers and acquisitions, and to more personal decisions such as exit planning for retirement.